The MicroBurn is now in its 4th year of operations with this September event being the 7th community event that has been organised. In 2017 we also organised a fundraiser in June, in Liverpool. The fundraiser was held in an aim to create extra revenue for the main event. As we are small in size, but function as any ‘Big Burn’, monies are welcomed to go towards infrastructure, art grants and yearly costs. Also, the community had a lot of fun at the last fundraiser, so wanted to do it again. 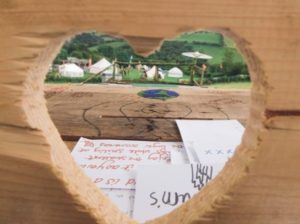 Our event location has been consistent for the last 3 years and is a working farm in Powys, Wales. The venue owners ask that the location is kept private of the MicroBurn as to not attract attention over the course of the weekend. The farm is an ancient site that has been fully restored by the owners. The family and their farm workers are very much a part of the event and are open to join us at any time over the weekend. There is a strong partnership with the farm and the MicroBurn and it is something in which we wish to maintain. The Farm has a strong ethos of being environmentally friendly, and we also aim to be as eco-friendly as possible during the event. Leave No Trace is important to us.

This year the MicroBurn increased the capacity of attendees from 150 to 175.This decision was made due to the increase in demand, but also balanced with what our infrastructure and organisation could comfortably handle. In 2016 we had a total of approx. 100 attendees on site despite selling 120 tickets. For this event we were aware we may sell out for the first time and that would lead to a figure increase of 1/3 in previous years. We also took into consideration that on average 10% of people do not arrive. Therefore 175 was a comfortable figure for us to work with. We also have an agreement at the MicroBurn that bigger is not always better for a Burn and want to maintain an intimate experience whilst being an open community.

We allowed children to attend for the second year in a row and also tried to include more Low Income tickets than ever before. As our event is small and the running costs are high, it is difficult for us to provide as many Low Income Tickets as we would like. Therefore we allowed participants to sponsor a Low Income Ticket. 6 people chose to do this, which allowed more people from the Low Income List to attend.

Tickets for MicroBurn 2017 also included food for the whole weekend that equated to 2 meals per day.

In addition to admission tickets we also allowed for community members to donate additional funds with their ticket purchase. Number of actual attendees at the event –150 (approx.)

Income for the MicroBurn event in 2017, also including monies raised from the fundraiser in Liverpool. 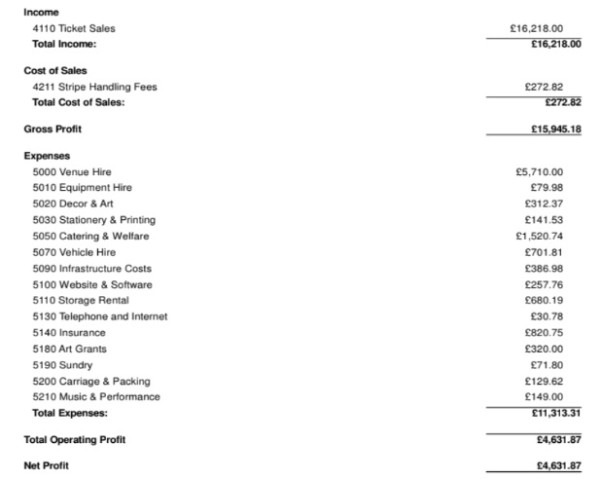 What Happened at the Event?

Over the course of the 3-day event, workshops, music and performance took place over the various outdoor and indoor site spaces and was organised by participants.

As the event is humble in size the whole Burn feels like one huge theme camp. However, some of our art projects were Micro-Theme Camps. 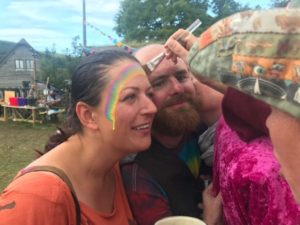 This year we aimed to raise money so that we could encourage more art at the MicroBurn event. As in previous years the feedback requested more art. The extra funds lead to us being able to put money towards Performance at the MicroBurn, to be included in the art grants.This year we had our first Temple at the MicroBurn and a Temple Burn. Participants were also invited to ‘adopt’ spaces on site, such as yurts that are available, to create small immersive spaces or projects. We gave money from the art grants towards creating immersive spaces at the event, as general art applications were low.

15 projects were agreed funding and a total of 8 were completed. Sadly, several participants bringing projects to the event did not attend or withdrew. 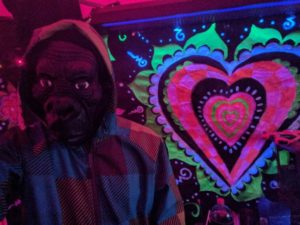 – Badger Brigade – Immersive Yurt Space with performances throughout the weekend.

– Effigy – Natural Art Project of ‘Mother Nature’ made from wicker

Additional to the other projects we have an indoor music space for live music, cabaret and late night dancing.

This year at the MicroBurn we ensured our Rainbow Rangers were trained each day and also that each shift was filled. Despite our event being small, we still ensure that we have rangers and an Event Lead, who is sober and can deal with any issues that may arise.

No major safety issues were reported during this year’s event.

Following the event we have received a complaint of a consent violation. We take this very seriously and the allegations have subsequently been processed via our Conflict Resolution Panel and MicroBurn Code of Conduct. We uphold a high standard of expected behaviour at the MicroBurn to ensure that all participants feel safe.

This year, our welfare space was hosted by Welfare Enough; A well-established organisation that provides support across many European Burns and festivals. It was an allocated space in a quieter part of the festival site, we ensured that all volunteers had training and also that someone with formal First Aid training was available at all times.

This year we ensured a higher level of Burn Safety on the Saturday and Sunday nights. We allocated Fire Wardens and placed a small fencing around the Effigy to ensure that distance was kept from the Burn. This was in line with our Insurance requirements and also taking into consideration the on-going concerns within the community about fire safety.

Every event brings new lessons for production and safety. Some of the lessons we learnt this year were;

At every event we try to ensure food waste is reduced, therefore food has been included in the MicroBurn ticket price and controlled by organisers, participants are free to bring additional food. Previously this has worked well, the event has grown slowly. This year, we increased the size of the event and some of the kitchen team were new to the event. This caused some teething issues and became stressful for the Team. Meals were delayed and food waste was still present. It was discussed in the Event Wrap Up that meal tickets should be made optional next year to experiment whether we can do it more effectively and still reduce food waste.

The weather was wet this year, which prevented us from using an overflow field for parking. It also meant the field was unsafe to use. Luckily, we managed to just fit in the cars and vans on site. This does mean however we need to consider any future numbers for capacity on site, as parking will restrict the options that we have to go over 175 participants.

It has been discussed by MicroBurn Leads that a clear Drug Use Policy will be distributed before and during the event.

Overall, the MicroBurn was a successful event and at the organisational level we managed to contain the demand for increase of size of participants and activity at the event. All Leads were successful in their production roles, aside from some minor teething issues. We had the majority of volunteers attend their shits and site tasks were managed. The event was safe and all complaints of safety post event are being appropriately managed via our Conflict Resolution Team.

For the first time the MicroBurn had a Temple and a Temple Burn, more Artwork and Collaborative projects. Despite our humble size, the MicroBurn represents many elements of a regular sized Burn.

Moving forward, the MicroBurn intends on happening again in 2018, the size of the event will not increase as we do not wish at this stage to grow. At the MicroBurn we pride ourselves on the intimacy the event provides in contrast to larger environments, whilst also ensuring that Radical Inclusion is possible. We are developing our Low Income Policies so that more people can attend. We have a designated Inclusions Lead to ensure all can access the MicroBurn, if they so wish.